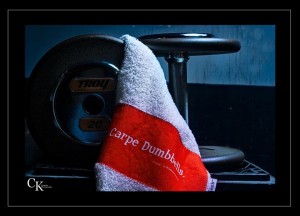 There are many lessons I learned from the regulars (aka gymrats) when I first joined a gym and started lifting weights at a fairly early age in Southern California.

It was a gym where there was a core group (the majority of them men who most people would have called “meatheads”) extremely serious about weightlifting, bodybuilding, and competition.

While I had no desire to become competitive, since I took my workouts seriously, I was embraced as part of the group. As one of the youngest people there (and a woman!), many of them took it upon themselves not only to teach me good form, but also good gym etiquette. Looking back on that experience years later, I now realize there were also many lifelong lessons they taught me along the way, which I would like to share with you.

These are the top three life lessons I learned from competitive bodybuilders:

1. What you consider a flaw others probably see of as a strength.

Working a body part to achieve a certain aesthetic result was something to which people paid close attention. I remember thinking that because this was so important to them, they might be critical of others, but instead learned the exact opposite. When someone commented about how her legs had a weird shape one of the guys piped in that it was an advantage because when worked correctly, she would have a look no one else could achieve.

So that physical trait that plagues you? Think about how to turn it into an advantage.

2. Remember to ask questions and listen to your community.

Don’t know how to work a certain body part best? Ask your gym community. Need help with a spot or re-racking weights? Ask the person on the bench next to you.

While social media didn’t exist back then and may now offer a new type of community, the true heart of your gym experience is right in front of you. If you’re in the right gym, asking someone for help or advice may be scary at first, but you’d be surprised how willing people are to help once you ask and then, actively listen to their responses.

When the guys at my gym saw that proper form was important to me, I would get regular feedback when they saw something I could improve. It wasn’t a long, drawn out discussion but instead, gentle reminders at key times during my workout.

It was a great way to build a foundation in how to exercise smart at the gym.

Don’t let fear or lack of knowledge keep you from getting your best workout. Just ask for help.

3. Decide what your willing to do and stick with your convictions.

One of my friends who was a female competitive bodybuilder (this was before the days of figure or bikini competitions) would tell me stories about what happened just before competition; about the extremes some people would try.

The story that stayed with me most? She knew people who would cover themselves in saran wrap and then sit in the sauna. Crazy, right? But to them, it was important to do anything for that last little bit of water loss to be as ripped as possible.

In any endeavor, there are a lot of things people will do to reach their goals that put their health and well being into jeopardy. You don’t have to be one of those people.

When it comes to your health and fitness, you have to decide what you’re willing to do and stick with your convictions – because you will be tested. There will be some new workout that promises great results but may aggravate an old injury, or some new diet approach may look good on paper but your gut says (literally & figuratively) is too good to be true.

Remember: In an attempt to get physically strong, many people lose their strength of character.

As cliched as the term “journey” has become, it’s still true that each of us determines the specific stops we make through the process. It’s with each choice we make that we are able to achieve (or not) the results we want.

The true test of our strength, however, is standing firm in the promises we made to ourselves.

What life lessons have you learned while you strive to reach your health and fitness goals?

1 thought on “3 Life Lessons I Learned From Competitive Bodybuilders”

While I’m a firm believer in doing what you can to move wherever you can – is yoga in the ‘can’ (on an airplane no less) something that you’d do? The majority of the poses

Last week was our first “move of the month” feature which showcased the T3 method of Jennifer Jordan, the trainer behind Sweat and the City. I did a short interview with Jennifer so that we could learn

While a fortunate few are able to ride year round, most people head inside at some point during the year and the stationary bicycle becomes their new best friend. For those of you who are

And Now A Word From…